The light you use for growing plants will determine how your garden develops. It doesn’t matter if you are growing indoors or outside; the type of lighting you use can make the difference between strong plants and weak plants, or a beautiful harvest and a less than satisfactory harvest. So, the reason that grow lights are red and blue has to do with the way that plants use light.

Even though plants make use of the full spectrum of white light, the red and blue spectrums have the most profound influence on the development and the flower and fruit production of the plants. Red and blue lights also use less electricity and are cheaper to run in an indoor growing environment.

There are two main components to indoor grow lights; the spectral make-up of the light source and the light fixture itself. These two components of indoor grow lights work together to produce the spectral distribution of light for your gardening space. Your goal is to match the spectral distribution to the plants that will inhabit your grow space. That concept may sound complicated, but once you understand the basics of the effect of light on plants, everything will become clear.

What Effect Do Red And Blue Light Have On Plants?

What we perceive as white light from the sun is actually made up of all the colors of the rainbow. The three major colors of light are red, blue, and green.

When we look at a plant under blue light, we will see the color green. That’s because when white light is broken down into its component colors, it turns out that plants don’t reflect much of the red or the blue light that reaches them. They absorb these two light spectrums and use them to grow and produce flowers and fruit.

The fact that plant leaves don’t usually appear blue or red shows that they absorb those frequencies of the light spectrum and use them in the plants’ internal processes. This impacts the strength of the growth, the development of roots and leaves, and of course, the all-important development of the fruit!

Natural sunlight is considered white light and is made up of all the spectrums of light. Sunlight contains green, red, and blue light in almost equal quantities.

How Does Blue Light Affect Plants?

The effect that blue light has on plants is directly related to chlorophyll production. Plants that receive the right amount of blue light will have strong, healthy stems and leaves.

If plants do not receive enough blue light, they will be thin and spindly and will often not have sufficient rigidity in their stems to hold up their own weight. The term among growers that is often used to describe this problem in plants is that they appear to be “leggy.” In other words, they look like they have long, thin, wobbly legs that cannot support them.

If your indoor plants, especially the seedlings, appear to be reaching up towards the light too fast, and the stems are looking spindly, then the grow lights you are using are probably not offering sufficient amounts of the blue light spectrum.

How Does Red Light Affect Plants?

The red light spectrum also affects the plants’ growth and promotes sturdy growth in the plants, but the red light is also essential in the early life of a plant in seed germination and the development of healthy root systems or bulbs.

As the plant grows, red light stimulates the growth of healthy leaves and also plays a major role in the photosynthesis process of the plants to convert nutrients into usable food for the plants.

Red light is also an important trigger that facilitates the flowering of the plant and also in the production of fruit. 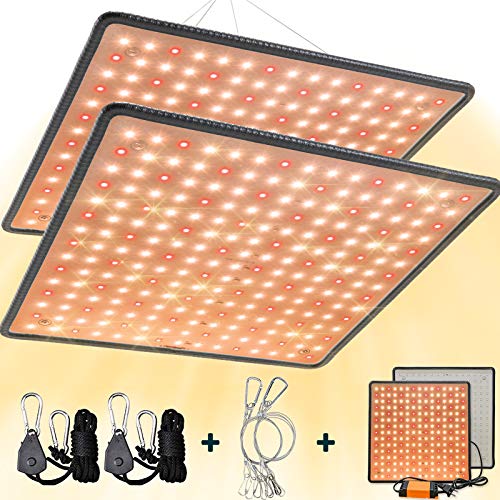 What Is Far Red Light?

Far-red light is light in the upper end of the red light spectrum that is close to infra-red. Red light falls in the region of 620 to 750nm wavelength, while far-red falls in the 750 to 850 spectrum and is on the border of light that is invisible to the human eye. Research has shown that far-red light also plays a role in the stimulation of flowering of plants and on leaf and stem extension.

The absence of the far-red spectrum has been shown to produce plants that are more compact and smaller, with less extension of the main stem of the plants.

Thus, you can limit the size of your plants’ if you choose red grow lamps that have a lower far-red component and a greater red component.

The indication on the lamps will be an R:FR designation to show the combination of red to far-red spectrum that the light emits.

What Proportions Of Light Are Needed?

Even though white light contains almost equal quantities of red and blue light, the plants use more of the red light spectrum than the blue light and often appear as purple grow lights.

For this reason, the blue light intensity does not need to be as significant as the red light. The plants seem to prefer a ratio of 80 to 85 percent red light combined with 15 to 20 percent blue light.

Why Do Grow Light Manufacturers Make Red And Blue Light?

The main reason that manufacturers produce red and blue grow lights is to make better use of the electricity to produce the wavelengths of light that the plants will make the most use of.

While the plants do use components of all the spectrums of white light, red and blue lights have the most profound effect on plants.

Red LED lights make the most efficient use of electricity in converting the energy from electricity into light. Thus, a red LED light will consume less electricity to produce red light than a lamp that produces white light would produce.

Similarly, blue LED lights use less electricity to produce light. Therefore, when blue and red light combinations are used in a grow tent or an indoor growing system, they would consume less electricity than a lamp that produces white light.

This helps to cut the costs of running grow lights for your indoor growing system. While this may not have much of an effect on your energy bill if you are only running one grow tent, if you are growing on a larger scale, the consequent energy costs can be extensive.

Using red and blue lighting lamps makes better use of the available electricity and makes the energy costs for the grow system cheaper than if it were powered by white lights.

Why Not Use A White Light for Indoor Plants?

Plants grow great under white light because they then have access to the full range of the light spectrum. However, the cost factor of running white lights in your grow room can rack up quite quickly when you are powering white light lamps for your plants on a large scale.

If you are running a smaller scale indoor growing operation, there is no reason for you not to use a white light to supply light for your plants.

You will just need to make sure that the white light is providing a wide enough spectrum of the white light to be beneficial to your plants. You would need a white light that provides at least between the 400 to 700nm of the light spectrum.

I’ve had great success with my Barina 4′ full spectrum LED lights, They are simple to use and cheap to run. I grow greens, tomatoes, cucumbers and herbs in my Tower Garden and my Aeroponic buckets. 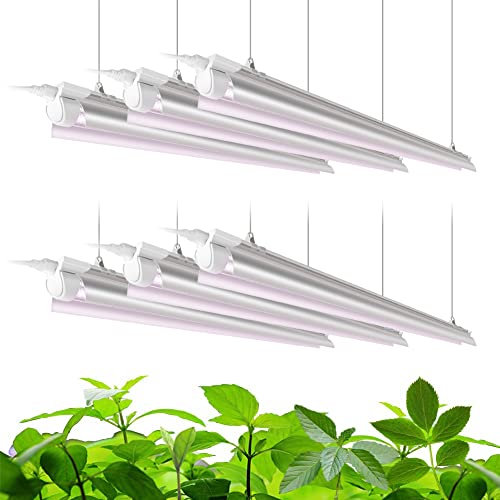 Many people growing plants indoors start with a small setup, sometimes even a homemade setup, to try out this growing system before committing money to the operation. This is because grow lights can become expensive, and it is cheaper to pick up a couple of LED lights from the local hardware than dedicated grow lights.

While this is the way most of us started, you will quickly find that some of the results are less than satisfactory. This is because many of the lights supplied in the local hardware store are not manufactured to provide the correct width of the spectrum of red and blue lighting required by your plants.

The best results for your indoor plant growth will be achieved by the use of a combination of red and blue grow lights that are designed for growing plants indoors.

I love to grow great food and eat great food. Controlling the quality and supply of my food has always been a passion.

Nutrient Film Technique hydroponics is what most people envision when they think of hydroponics. The system is often used commercially, but it can also be a viable implementation for a home...

Continue Reading
link to What Is A Dutch Bucket System? - A Guide To Hydroponics

You may have heard Dutch Bucket systems mentioned in hydroponics circles but don't know what this system is all about. Most hydroponics literature won't mention Dutch Buckets because it is a growing...