Nutrient Film Technique (NFT) hydroponics uses a constant flow of nutrients to feed and hydrate plants in growing channels. NFT is water and nutrient-efficient but is relatively complex to set up. Grow channel length, slope, and nutrient flow rate are metrics that must be tweaked for optimal growth.

Hydroponics has many implementations using different techniques and technologies, which lend advantages to each type. Each system has disadvantages that may disqualify them from your particular growing needs. Our detailed guide on Nutrient Film Technique hydroponics will help you decide whether this system is right for you or not.

NFT hydroponics requires a very specific structure and hardware implementation. This is needed to ensure the plants’ oxygen, water, and nutrients requirements are met to produce healthy, thriving plants that will generate a high yield.

Passive hydroponic systems work with zero to minimal reliance on technology and moving parts. NFT hydroponics can be implemented as a passive or an active solution, but its most common and efficient form is as an active system.

The depth of the constantly flowing nutrients is relatively shallow compared to other types of hydroponics, and it is from this shallow nutrient film that the system derives its name.

Examining how this hydroponic technique works will give you a better understanding of the system’s mechanics and whether it will work for your plant growing needs.

I’ve had the best results growing with a Tower Garden vertical aeroponic system at my home. It’s been the easiest way to get reliable harvests with minimal effort. I grow herbs, greens, strawberries, tomatoes and cucumbers in my home office and my back deck depending on the season.

The tower works on a timer which runs the pump so all I have to do is top up the water reservoir and harvest my fruits and veggies when I’m hungry. For more details check out my review of what is a tower garden and how does it work.

How Does NFT Hydroponics Work?

Nutrient Film Technique hydroponics is one of the most technical of the hydroponic systems, but it is not difficult to understand.

The implementation of the system must be correct for the system to work optimally, but the principles behind the technique are not complicated.

The typical growth structure in NFT hydroponics is long tubes or channels rather than open, flat trays as the grow chamber. This has several advantages for the system.

It is easier to elevate one end of a channel than a wide tray, and it limits the weight of the water contained in each channel at any one time, making it easier to support the system.

Many gardeners create their own DIY Nutrient Film Technique systems using round PVC piping. While the round tubes work to an extent, they have an uneven nutrient film. The nutrient film on the sides of the rounded bottom is shallower than the nutrients in the center of the tube.

This uneven film can cause the plants’ roots to concentrate in the center of the nutrient flow and limit or block the nutrient flow. This problem can be overcome by regularly inspecting the pipes to check for blockages.

It is better to use flat bottomed channels to create an even depth of nutrients at the bottom of the growing channel. The wider surface area of the nutrient film allows the roots to spread out in the channel, limiting the risk of blockages. 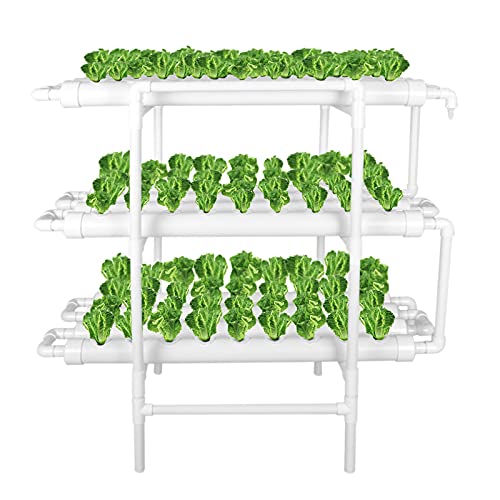 What Length and Angle For NFT Channels?

The maximum length of the growing channels in your NFT system should not exceed 35 to 40-feet or 10 to 12-meters.

The best gradient to use on the grow channels is to have a drop ratio of between 1:30 and 1:40 if you measure in inches. The drop ratio means that for every 30-inches to 40-inches of pipe length, the slope or drop should be increased by 1-inch.

The angle and length of the growing channels are important to consider when constructing an NFT system. If the angle is not right, the flow of nutrients will be too slow. If the channel length is too long, the nutrients in the water may be depleted by the time it reaches the plants at the far end of the growing chamber.

If you want to build a DIY NFT system there are a couple things to consider when choosing the materials of your channels. Check out my article outlining the best materials for hydroponic systems.

How Are The Plants Supported In The Grow Channels?

Most growers who use NFT hydroponics place net pots in the holes in the upper part of the grow channels to support the plants. A growing medium such as coconut coir is sometimes used in the net pot to give the plant some additional support.

If a growing medium is used, care must be taken to ensure the bottom of the net pot is not blocked to prevent the plants’ roots from reaching the nutrients in the grow channel below.

Many growers do not bother with a growing medium, only using the net pot to support the plants’ root structure.

If you are interested in growing larger flowering and vining plants like tomatoes, peppers, squash and melons, check out my guide to growing with a dutch bucket system.

How Are The NFT Channels Suspended?

The grow channels can be suspended in a variety of ways. Some growers suspend the channels with steel cables; others use an “A” frame structure with grow channels or pipes on either side of the “A” frame.

In commercial applications,  the channels are stacked between two frames to make use of vertical space for the growing system.

Whichever way you choose to support the channels, it is a good idea to have a method to adjust the slope of the channels.

How Are The Nutrients Added To The NFT System?

The pump must deliver a flow rate of at least 0.25-gallons to 0.5-gallon or 1-liter to 2-liters of nutrient-laden water per minute into the upper end of each grow channel.

If the pump were to lose power or break down, it is imperative to get the water flowing as soon as possible. Since the nutrient film in the channel is shallow, it dries quickly, exposing the plants’ roots and causing them to dry out.

Spare pumps and an alternative power source are generally backup technology that must be kept in reserve for these problems. Here’s how to diagnose and fix a hydroponic pump failure.

Implementing the NFT system as a passive system is possible, where the nutrient reservoir is raised to allow the nutrient flow to be gravity-fed rather than via a pump. While this option works to deliver the nutrients, it poses a problem for returning the nutrient to the reservoir from the drainage system.

Where a passive implementation of NFT is used, the excess nutrients are usually drained into a separate drainage reservoir and then manually returned to the main reservoir.

Check out my guide to which hydroponic nutrients are best for growing at home.

How The NFT Drainage System Works

In most Nutrient Film Technique installations, the main nutrient reservoir is positioned at the end of the channels or pipes, and the system drains directly into the main reservoir.

The pump in the main reservoir will push the nutrients to the highest point in the system to start the cycle of nutrient flow.

The drainage outlet is installed at the lowest point at the far end of the grow channel to ensure complete drainage of the system and prevent standing water in any part of the channel. 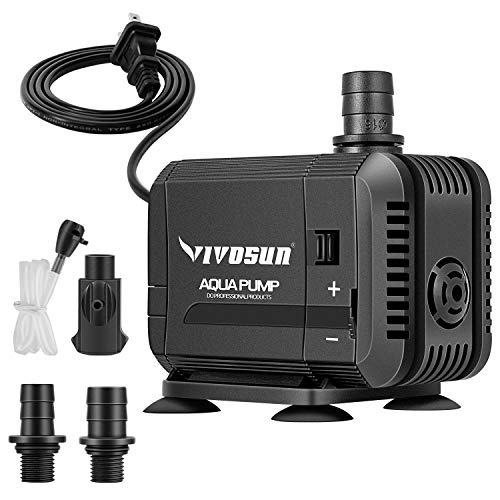 NFT supplies these main requirements in the following way. The nutrient film is shallow, which gives ample air space in the grow chamber for the roots to access oxygen. The constant flow of nutrients through the system replenishes the water and nutrient supply for the plants.

To keep the balance in the system, the grow chambers must be angled or sloped to provide only a thin film of nutrients flowing at the bottom of the grow chamber. This creates a constant flow and creates the upper airspace for the roots to absorb oxygen.

If the slope is insufficient, there will be too much water and nutrients and insufficient airspace. If the nutrient flow is not strong enough, the plants will deplete the nutrient supply in the system faster than it is being replenished.

The benefits of NFT hydroponics have made it a popular system, especially for commercial and home hydroponic growers requiring a vertical system.

The main advantages of Nutrient Film Technique hydroponics are as follows.

There are several disadvantages of NFT hydroponics that may make it unsuitable for some people and for some growing situations.

What Can You Grow In NFT Hydroponics?

The shallow growing channels limit the system to supporting plants that have shallow root systems. Some larger plants can be grown in NFT hydroponics, but they may require special support structures for their vertical growth. This is due to the net pots and limited growing medium that can be used to support the plants at the root level.

The following plants are suitable for growing in Nutrient Film Technique hydroponics.

Plants unsuitable for NFT systems include the following food crops.

Is NFT Hydroponics Good For Home Use?

If you are new to hydroponic growing, Nutrient Film Technique may be a daunting and challenging hydroponic system to start your journey into growing your own food.

For beginners, I would recommend a simpler system such as drip hydroponics or the Dutch Bucket system to explore hydroponics for your growing needs.

NFT hydroponics is a suitable system for home growers, but it requires some prior knowledge, understanding, and patience to use effectively. If you want to start your hydroponics experience with NFT systems, be prepared for a fairly steep learning curve to achieve sustainable results with the system.

NFT hydroponics is the perfect system for home growers with limited space since the system can make use of unused vertical space to grow food crops. If your growing space is limited, it is certainly worth the effort to explore Nutrient Film Techniques to make the best use of your available growing space.

If you’re planning to have a hydroponic system at home consider using a grow tent to improve the environment for your plants and home.

Nutrient Film Technique hydroponics is a fairly advanced system that is more complex to set up and maintain than many other hydroponic growing systems.

It is a great system for vertical gardening and is water and nutrient-efficient. The NFT system is versatile and scalable, making it attractive to commercial and hobbyist hydroponic growers!

I love to grow great food and eat great food. Controlling the quality and supply of my food has always been a passion.

link to What Is A Dutch Bucket System? - A Guide To Hydroponics

You may have heard Dutch Bucket systems mentioned in hydroponics circles but don't know what this system is all about. Most hydroponics literature won't mention Dutch Buckets because it is a growing...

Hydroponics is a clean, controlled, and often easy form of gardening that is becoming popular among many gardeners, especially those with limited space outdoors. Wick hydroponics is one of the...